Back To Main Page 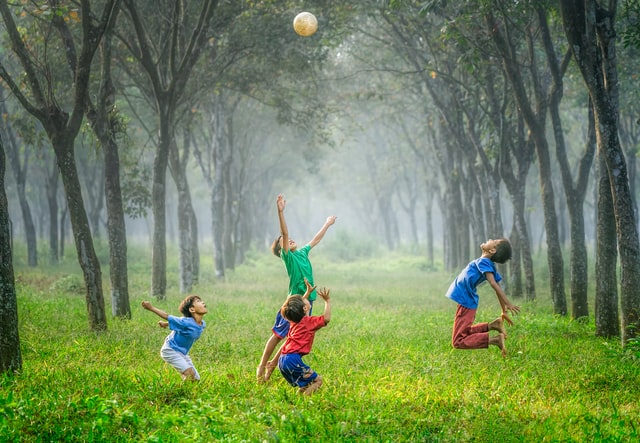 Improv-Eyes® – Using Games in the Classroom for Inclusion and Creativity

Photo by Robert Collins on Unsplash

This paper briefly sets out the initial stages of research on the contribution of drama based improvisation and improvisation games to education, mainly by US-based researchers. It also outlines a funded research project (“Improv-Eyes”) currently underway in Limerick city involving parents and children at primary school level.

Improvisation in this context is a series of games and exercises practised regularly. Over time, these exercises lead to increased creativity levels, which in turn boosts problem solving and idea generation. Dave Asprey, a prolific technology entrepreneur describes the process as follows: “During improvisation, the self-monitoring part of the brain deactivated, while the self-expression part of the brain got activated (medial prefrontal). Literally, that means that to be creative, you have to stop picking on yourself while boosting your self-expression abilities.”

Although improv is more widely accepted as a stage device, mainly for comedians, there is a growing body of research to suggest improvisation has applications in education. The creative method this paper is based around is improvisation (improv). The notion of improvisation in education refers to the exploration of ideas and queries from learners which are facilitated by the teacher within the framework of the curriculum (Maths, English etc.). Improv is currently seen as linked to English as a means of developing the English curriculum. It should also be noted that improvisational drama is also seen by the NCCA as “”having a contribution to make to the development of the child which is quite independent of any learning objective for which it may be used in any curriculum area”

How Improvisation can help Students

In order to develop core life skills such as flexibility and problem-solving, young learners need exposure to the unknown. Research has shown that children possess a higher level of creativity at a young age. In 1968, George Land, a researcher on the enhancement of creative performance, distributed among 1,600 5-year-olds a creativity test used by NASA to select innovative engineers and scientists. He re-tested the same children at 10 years of age, and again at 15 years of age. 98% at age 5 registered genius level creativity, 30% at 10 year and 12% at 15 years of age “What we have concluded,” wrote Land, “is that non-creative behavior is learned.”

What distinguishes improv from other taught skills is the pre-existing abilities of learners. Children are natural improvisers from a young age, and then unlearn these techniques as they are not practised or not prioritised within their education. Improv is inherently creative, and children have the double advantage of lower inhibitions when generating ideas and also a higher level of curiosity to explore the non-absolute aspects of things.

Why then should a course of improvisation be suggested? In short, the intervention is one which is designed to maintain and develop their existing creative skills, rather than assuming a clean start.

The key benefits of improvisation have been noted as follows:

Increased confidence: children who are encouraged to think creatively show increased levels of motivation and self-esteem.

Improved Problem-Solving Skills. Students who learn content in creative ways learn tactics to identify problems, make decisions and find solutions both in and out of school.

Improvisation significantly affects the development of creative thinking, which is both a life and work skill.

How Improvisation can help Teachers

We need to find approaches that can give teachers the tools they need to work creatively within a system that does not often support innovation.

One of the findings from the NCCA 2005 report was that many teachers did not feel comfortable in using improvisation as they had not received formal training in the subject. At present few qualified improvisation teachers operate in Ireland, and current budgetary constraints also limit the Professional Development options for teachers. As Robert Fisher argued, creative learners need creative teachers who provide both order and adventure, and who are willing to do the unexpected and take risks (Fisher, 2002). It is the author’s view that investment in this area is important and will help develop both teacher and learner levels of creativity, and can be facilitated at a relatively low cost.

Of course, improvisation is already someway embedded in everyday teaching practise. “Giving room for students questions or explorations…improvisation takes place at least at some point in all of this” Providing a method is used which compliments, rather than adds to the existing workloads for teachers, improvisation skills benefit teaching staff in the following ways:

It helps learners work better together, thus delivering a unified classroom. Improvisation exercises are largely group-based, and are instrumental in bringing groups together and focussing them on a single goal or task. The “rules” of improvisation are based on the “Yes, And” principle, which ensures learners support, rather than criticise each other’s efforts.

Improv provides an alternative way to imparting knowledge. In the US, the Developing Teachers Fellowship Programme (DTFP) utilizes improv when teaching teachers, and encourages them to be “playful” with the curriculum. The Bus activity for example can be used across a number of subjects, whereby a number of different passengers board a bus and interact together. Historical figures, fictional characters, even conversations, such as one that might have taken place between Daniel O’Connell and an English colonist can be facilitated. Learners can play with their knowledge whilst demonstrating understanding.

Consistent practise of improv offers confidence for both teachers and students in theuncertain. It can be difficult to cede control of a class, especially one where boundaries are important from a developmental aspect. It is important to remember though that when considering the phrase “continuum of learning”, we must factor in the independent ability of a child to create knowledge, which may not occur when classes are planned without room for deviation.

When considering the above it is clear that for teachers to teach creative methods they need resourcing on creative methods themselves. In order to facilitate creative learning, a degree of comfort with creative practise and the requisite boundaries needs to be put in place. As the leading expert in the field puts it “ examinations of improvisation theatre games and formats an help us better understand the relationship between curriculum structure, classroom processes, and learning…….Providing improvisational training for teachers might help them to more effectively create their own improvised lessons”.What is helpful about the current primary school curriculum is that it doesn’t focus solely on knowledge acquisition as a benchmark for success, but rather the development of essential soft skills as well as fostering an appetite for further learning.

Research has shown that educational initiatives involving parents have a greater chance of success, and improvisation may be the way in which to encourage parents who may not normally engage with the education system to come on board and learn to facilitate improvisation with their child. The advantage of such an initiative is that improvisation relies principally on imagination, and textbooks are not strictly necessary. It also means the activities are reinforced outside the classroom.

Overview of the Improv-Eyes Project

The Improv-Eyes project was set up in 2013 to explore how improv could help students in primary education settings. Permission was sought and granted to run weekly improv classes with a group of primary school students in a DEIS School in Limerick city centre.A pilot scheme ran between March and June 2013. A group of second class students were selected in consultation with the school principal, namely because the age group and because of future plans to include parents in the programme.

Some challenges presented themselves in this project. Running the class on Mondays proved problematic, given there were about 5 Mondays lost due to school holidays. Apart from that attendance was pretty consistent for all of the learners. The advantage of this was that the learnings could be successfully applied to the funded project and avoid wastage.

Funding was granted to cover one school year in September 2013. Three groups were recruited for the project, two of which consisted of students, and the other consisted of parents. The first group was the original second class (5 learners) now third class grouping, as it was felt that to stop working with them would nullify the effects of the initial pilot project. The second group of students were the sixth class and one student from 5th class (6 learners). This group was chosen because of their overall enthusiasm for drama generally and their good behaviour.

Each week for one hour, the tutor met the pupils and conducted a series of improvisation games with them. Each game was repeated for a 2-3 week cycle and then rested to ensure the pupils understood the games, but also didn’t get bored with them. Games were sourced that were designed to improve the following key skills:

The following changes were observed with the continued use of the games:

The team-building skills in the group had improved. Games such as 3-noses, which look at mathematical skills also built on the necessity of the group working together to achieve a shared outcome. The collective celebration was definitely a reflection of the sense of accomplishment the group felt. The group also mix better and are more likely to work with different group members than sticking with their best friend.

The learning environment is definitely improved when the right balance of physical and mental focus games are played. The pupils are energetic but a range of purely physical games serves only to cause disruption and chaos in the group.

The group’s listening skills had improved, and individuals were less likely to get distracted between and during games. Games such as Group Count, which demand concentration and listening showed huge progress in terms of group focus and listening to both verbal and non-verbal cues.

Narrative skills continue to be challenging. Story games have proved challenging with the group, with individuals pursuing individual story lines asopposed to following a “common thread” which is established by the group.

The key obstacle with this project is ongoing recruitment of parents. Initially the target group was the parents of the children involved. Unfortunately given a number of personal factors, only one set of parents attended. The scope was extended to all parents of children in the school but this was also unsuccessful. Finally parents at a neighbouring DEIS school were invited to participate and even then this proved challenging given their involvement in other school activities. It is hoped that given a group is now recruited that the parents will get into the habit of attending and will keep with the classes.

The funding for this project will run out at the end of the school term. It is hoped further funds can be sourced to run a wider project encompassing non-DEIS schools and which include parents. In this way, a more comprehensive set of data can be gathered.

Want new Ideas? Nothing to it.

You are welcome to change your privacy preferences here.